For local business owners in Williamson County the turning of the new year means an opportunity to bolster their reputations: the Sizzle Awards.
The Sizzle Awards honor local businesses in cuisine, shopping, services, health and wellness and personal care. Members of the community vote for their favorite in each in a variety of categories like “Best New Restaurant” or “Best Youth Music Instruction.”
Presented by Southern Exposure Magazine, Williamson Herald and FranklinIS, the awards are something business owners mark on their calendar according to founder and Southern Exposure Publisher, Brandy Blanton. 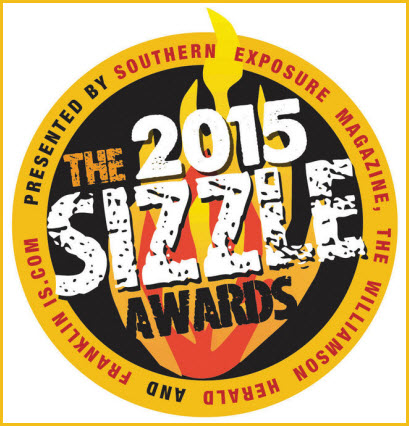 “Business owners always look forward to it,” Blanton said.
“It’s a big deal for them to tout themselves.”
Now in its ninth year, Blanton said she is still finding ways to keep the awards fresh and interesting and local.
“We strive every year to keep it as local as possible and even added the moniker of ‘local’ in several categories,”
Blanton said. “But we aren’t ignoring big business because some categories are dedicated solely to them like a category for best department store and grocery store.”
Restaurant Five Guys Burgers and Fries has been awarded in the past and have the recognition displayed in places as far away as Las Vegas, New Orleans and Panama City, Florida.
Winners are determined by number of votes, where one person may only vote for one business per category. The voting process begins with every establishment having a clean slate and only write-in votes are accepted. Blanton said the voter turnout has grown every year and that thousands participate.
Businesses receiving the most votes will be awarded a trophy and the first and second runners-up will get certificates. Voting polls open Feb. 1 and will close March 4. This year’s awards will feature a ceremony and after party at the Factory in Franklin on a date yet to be determined.

Vote For Your Favorite Businesses in Williamson County